Venus is the second planet from the Sun and the hottest planet in the Solar System because of its dense cloud cover and high CO² levels.It is named after the Roman god of love and beauty and is nicknamed “The Morning Star”.It is sometimes called Earth’s “evil twin” because of its poisonous atmosphere. It’s surface is high in sulfur hence a yellow tint. 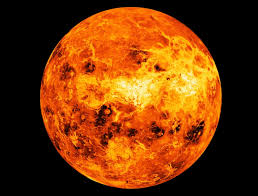